Being a fan of super-hero comics I know the value of a nice round number, so it feels somewhat momentous to have finally reached Game 50.  I didn't realise that it was coming up, so I didn't arrange for it to be anything special.  Instead, I've just gone ahead with my standard chronological order, and played the next game on my list, Kadath.

Having completely the quests given out by the eight kings of "Ultima" (as the world seems to be named in the manual), the next stage of my mission to defeat Mondain was to become a "space ace".  The chain of quest-lines went like this: to confront Mondain I needed a time machine; to get a time machine, I had to rescue a princess after becoming a space ace; to become a space ace, I apparently needed to go into space and shoot down 20 enemy ships.

I did press on playing after this, but I'll end the post here.  My next goal is to head into space to become a Space Ace, which involves Ultima inexplicably becoming a 3-D space combat game.  I mentioned before that this game is wild, didn't I?
Posted by Nathan P. Mahney at 1:18 AM 2 comments: 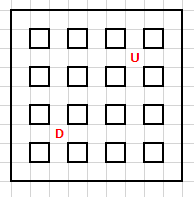