Yes, I know, it's taken me ages to get around to writing this post.  There hasn't been anything going on in my life to prevent me from writing it up, and I haven't been dealing with any particular personal problems that might affect my desire to write.  This delay has come down to one thing, and one thing only: I really didn't want to spend time replaying this game.
It's a problem of my own making, really. If I'd just taken some screenshots when I played through it the first time I might have been able to knock up a post from memory.  I say might, but that's debatable: my memory of this game is hazier than pretty much anything else I've played for the blog, and I only went through it about six months ago.  That's one of the benefits I've found with keeping the blog: the games I've written about stand out sharply in my memory.
Anyway, I've now replayed Balrog Sampler, and the pain is all in the past.  I'm very keen to knock this post out so that I can move on to something (literally anything) else.  Last time around I went through the basics of the game, and played through the wilderness area. This post will deal with the dungeon, which is the meat of the game, and where things get much more difficult (as you'd expect).
Early on, the thing that always stymied my progress was the combat, specifically the random encounters.  They're not overwhelmingly common, but they happen often enough to be annoying, and my starting characters invariably got killed by them.  There's supposedly a way to balance things by choosing the correct combination of weapons and armor based on your character's Strength and Dexterity scores, but I never figured it out. I didn't try every combination of course; there are far too many weapons for that. I tried quite a few though, and nothing seemed to work.
What I found was that the trick to surviving is in raising your character's Strength.  One way to do that is with the Personality Change Machine in a room to the north of the dungeon entrance.  When you use it, it rolls up completely new stats for your character.  It's a little random though, and doesn't really raise your Strength beyond the normal limits.  The better method is to head south and west from the entrance, and find the library.  There are a number of books to read, one of which is about physical fitness.  Reading it summons a drill instructor, who forces you to do push-ups that raise your Strength by two points.  Unlike many of the other stat boosts in the game this one can be done repeatedly, and the only limit to how high you can get your Strength score is your gold, as each reading costs 10gp.  Eventually you'll get it to a point where none of the monsters can threaten you, but the trick is to get there before a random encounter wipes you out.  I'd also recommend not boosting your Strength too high; this game is fragile, and any numbers outside of the usual range can cause it to cack itself.
There's a third method of getting through combat that I haven't mentioned yet, because it's definitely a bug.  After I played for a while, the monsters suddenly all had Strength ratings of 0, and were incapable of doing any damage.  Having suffered through the early stages of the game, being killed repeatedly by every random encounter that came along, I seized on this immediately when it happened.  Most of my exploration of the game was done with this glitch in effect.  Once I'd solved most of the puzzles playing this way I went back and fought my way through legitimately (or as legitimately as I could in my probably-cracked version of the game that starts me with 30,000+ gold pieces).
Adventure games like this are a little unfocused, so I sometimes struggle to figure out which areas to write about first.  This is why my adventure game posts often resort to point form, as it helps me to organise my thoughts.  The goal of Balrog Sampler is to find various treasures and take them back to the bank vault on the surface.  I'll break this one down by the treasures to be found, and hopefully that will cover everything important. 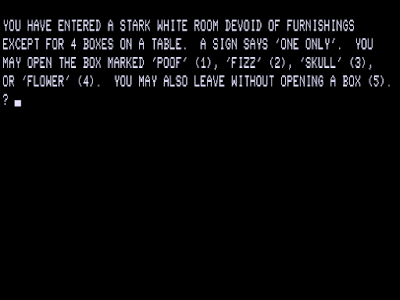 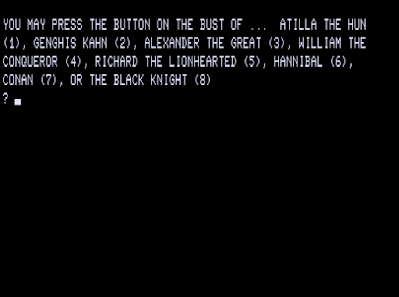 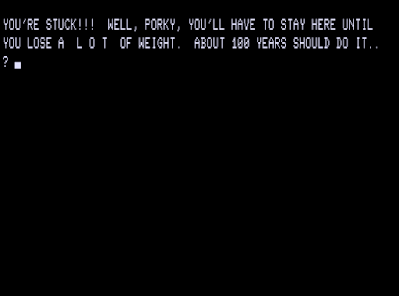 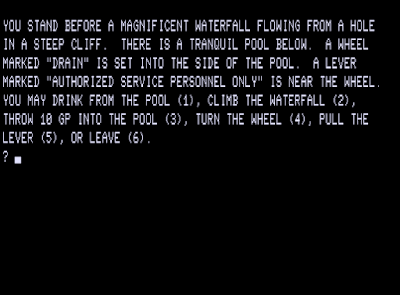 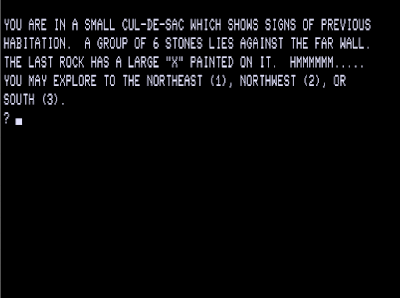 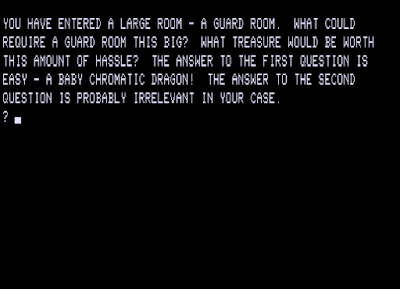 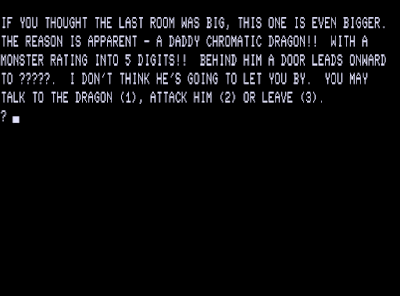 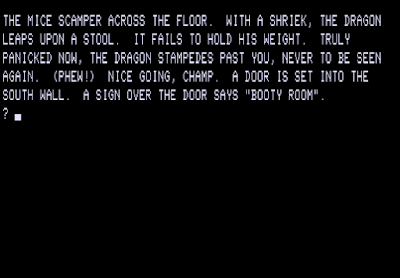 Finding the treasures above got me to 1871 points out of a possible 1951. Those missing points will haunt me, but not enough to ever want to go back and try this game again (unless I find a complete walkthrough, or someone just tells me what I'm missing).  I think I know where the missing points might be: there's a high alcove in the library that can be reached with a ladder, but lurking in the alcove is a creature that bites my arm off or eats my weapon when I try to reach inside.  I've tried all sorts of things: throwing pretty much my entire inventory, waving a magic wand at it, trying to wedge its jaws open with an iron bar.  I'd have tried more, but the game frustratingly tells you that you're wasting time after a few ineffective usages of your inventory. You then have to leave the area and go back, which isn't that bad, but it's pretty grating when you add it to the many other inconveniences that the game piles on you.
I think that's about where I'm going to wrap things up with Balrog Sampler.  There's some interesting stuff in it, even if the adventure game elements are a bit simplistic.  None of the good elements are able to get past how horrible this game is to play, though.  Just getting the thing running is nightmare enough, but once that's done there's no shortage of errors and bugs.  Sometimes the game won't let me buy weapons when I start a new character.  Sometimes it doesn't acknowledge items in my inventory. There's the bug with the monsters in combat that I mentioned above (a blessing in disguise, really).  And to top it all off, the save game system doesn't always work, so I was constantly having to restart.  I really wasn't kidding when I said that I didn't want to play this game ever again.  I dread the sequels.
RADNESS INDEX:
Story & Setting: The story is yet another treasure hunt, with little to distinguish it's plot from the multitude of other games inspired by Colossal Cave Adventure.  The dungeon setting has no rhyme or reason, with nothing to connect its various areas.  And now that I think of it, it doesn't contain a balrog of any sort, which makes the name quite nonsensical.  Rating: 1 out of 7.
Characters & Monsters: Although there's not much in the way of interaction, there are a number of characters scattered through the dungeon, and a good variety of monsters.  The monsters aren't differentiated by anything more than their strength, but at least some effort has been made.  Rating 2 out of 7.
Puzzles: I wavered on whether to use the Puzzles or Combat category here, and ultimately I went with puzzles because I spent most of my time playing the game with the combat horribly bugged.  The puzzles are rudimentary, and almost entirely inventory-based. Those that aren't rely heavily on random chance, or multiple choice options with little in the way of clues to guide you.  What puzzles are there are either simple or frustrating, with nothing in-between. Rating: 1 out of 7.
Aesthetics: The writing for this text adventure is good for the time, and it often displays a warped sense of humour that is by far the game's best feature.  It's not enough to elevate it very far, though. Rating: 2 out of 7.
Mechanics: As an RPG/adventure hybrid there are some interesting things going on in this game: the multiple-choice interface might be simplistic, but the inventory system is quite involved, and the combat seems to be trying to emulate the tabletop RPG Tunnels & Trolls.  Unfortunately, this is probably the most broken game I've played for the blog, not counting those that are incomplete, such as Library.  Between the effort it took me to get running, the many crashes and bugs, the unreliable saves, and the general clunkiness of the interface, I can't give it anything but the minimum score. Rating: 1 out of 7.
Challenge: Although the puzzle aspect is not too hard, I never was able to reach a balance where I could survive the combat without ramping up my Strength score to absurd levels.  I found this game difficult, and not at all in an enjoyable way. Rating: 1 out of 7.
Fun: This is easily the most painful game to play in the history of the blog. It would be nice to find a stable version that works the way it's supposed to, but the version I played was very far from that ideal scenario. Rating: 1 out of 7.
Bonus Points: 0.
The above scores total 9, which doubled gives a RADNESS Index of 18.  If the game worked the way it was supposed to it would have scored a lot higher, perhaps somewhere around a 30, but the sheer volume of technical problems has placed it as my lowest-rated game so far.  That's the curse of playing games chronologically: you have to take the terrible games alongside the gems.
NEXT: It's back to the priority list for a CRPG classic: Wizardry: Proving Grounds of the Mad Overlord.  I've never played any Wizardry games for any great length of time, so I'm looking forward to ticking this one off my bucket list.
Posted by Nathan P. Mahney at 9:06 AM 4 comments: