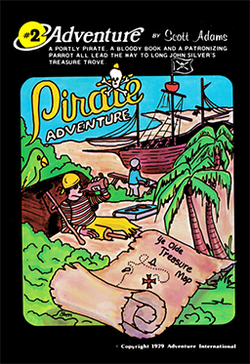 It's a brand new year, and what better way to kick off 2016 than with a text adventure from 1978.  Pirate Adventure is the second game from Scott Adams.  I enjoyed his first effort, Adventureland, well enough.  It was short, not too difficult, and a fine diversion for a day or two.  It wasn't a classic, but nor was it the terrible game I'd expected based on Adams' reputation.

Pirate Adventure was released on all the major platforms of the late 70s and early 80s, and even a few not-so-major ones.  (What's an Exidy Sorcerer?)  Its original release was on the TRS-80, so that's the platform I'm emulating it with.  (Not that it really matters for text adventures, but I like to keep things as authentic as possible.)  Some sources cite Pirate Adventure as a 1979 game, and others have it in 1978.  I've gone with 1978, because that's what's in my database, and I can't remember why I chose it in the first place.  I'm not overly fussed about the dates at this point, because all of these games have an official date of "prehistoric".

Much like Adventureland (and its inspiration, Colossal Cave Adventure), the goal of Pirate Adventure is to find various treasures and return them to a set location (in this case, your flat in London).  Whereas Adventureland had thirteen treasures to gather, this game has a mere two.  That hasn't made the game any easier, though; I've yet to find either of the treasures I'm looking for.

As mentioned above, you begin the game in your London flat.  The time period is a bit ambiguous.  The game has all the trappings of the pirate genre, but a "flat in London" hardly feels authentic to the 1600s.  Nevertheless, that's where the game begins, and in said flat there is a sign that says: "Bring *TREASURES* here, say: SCORE".  That's it for setting up the plot.  There's a sign in your house, and by golly you're going to obey it. 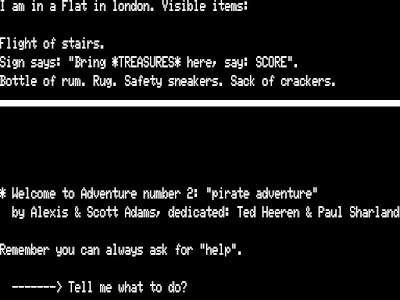 The flat is pretty small, with only a few areas to explore: a downstairs room, and upstairs room with a bookcase, a window ledge and a secret passage that opens when you take a book from the bookcase

The downstairs room contains a bottle of rum, a sack full of crackers, a pair of sneakers, and a rug.  Adventure game veterans will be trying to lift that rug straight away, but for the moment it can't be done, as the rug is nailed down.

The upstairs room contains an open window and a bookcase.  As mentioned above, taking a book results in the opening of a secret passage.  The book, inevitably, is a copy of Treasure Island.  The word YOHO is written in blood in the flyleaf, and there is another message inside:"Long John Silver left 2 treasures on Treasure Island".

The secret room contains an unlit torch, a smashed rum bottle, and a pirate's duffel bag that contains a box of matches.  There's also a sign that tells you how to extinguish your torch, because UNLIGHT isn't the most intuitive command.  The torch and matches are the obligatory adventure game light source, and the smashed bottle is a mystery for now.

The goal in the flat is simply to gather all the items you can, and read the word YOHO from the book.  The first time you read the word it transports you to the window ledge, and this can be deadly.  If you aren't wearing the sneakers you can slip and fall, which results in death and a trip to Never Never Land.  This doesn't necessarily mean your game is over: you can use the book to escape from Never Never Land.  But if you hang around in there for too long, you are declared dead and that's that.

If you say YOHO while on the ledge, you are transported to a beach on Pirate's Isle, and that's where the adventure really begins.  There is a ship's mast and a keel on the beach, and it soon becomes apparent that your goal is to build a ship (The Jolly Roger, what else), and sail to Treasure Island.  There are a number of interesting locations on Pirate's Isle, which I'll list below.

The first task here was finding the key, and that wasn't too difficult.  With the claw hammer from the cave in my possession, I returned to my flat and pulled out the nails holding down my rug.  (The nails were also an inventory item, and needed to build the ship.)  Under the rug was a set of keys, but before I could return to the island I was distracted by a noise.  I decided to investigate the secret passage, and I found the pirate from the shack asleep there, with an empty bottle next to him.  (I guess this explains why there was a smashed bottle and a pirate's bag in the room earlier.)  I took the bottle and woke the pirate, who said that it would soon be time to set sail.  Then he vanished, which was weird.  A magical pirate?  Lazy writing?  Or just system limitations?  I guess we'll find out later.

Equipped with the keys I needed, I was able to open the chest.  Inside was a set of plans that told me what I needed to build the Jolly Roger: a hammer, nails, lumber, an anchor, sails, and a keel.  I knew where all this stuff was, I just needed to gather it together.  There was also a map in the chest that showed the location of Treasure Island.

Now it was time to deal with the crocodiles.  This was the trickiest puzzle so far.  I figured that I needed to feed the things, but giving them crackers did nothing.  When I threw the parrot at them, the bird actually tried to fight them off for me, but it wasn't successful.  (A call-back to Colossal Cave Adventure? Probably.)  Nothing I tried was working, so I wandered around just trying random things.  That was when I tried using the water wings in the lagoon, and discovered that they allow me to survive high tide.  From there I swam further out to sea, and found a fish.  This was obviously the solution, so I gathered some sea water in my empty bottle (the fish would dry out otherwise), took the fish, and fed it to the crocodiles.  Sure enough, the crocs let me past, my key unlocked the door, and I was able to retrieve the parts I needed to build the Jolly Roger.

With the ship assembled I climbed aboard, and was a little surprised to see the pirate waiting for me.  I wasn't entirely sure what to do next, but the pirate helpfully told me to WEIGH ANCHOR, and then to SET SAIL.  With the help of the map we sailed to Treasure Island, and that's where I left off.  With the final adventure location ahead of me, it felt like a good time to take a break.

Pirate Adventure is a leap ahead for Scott Adams, and feels a lot more sophisticated than Adventureland.  Not that it's any better technologically speaking: the parser and interface are exactly the same.  But the structure of the game feels far more advanced.  I like the way it's separated into distinct areas, it gives the game a flow and a sense of progression that was lacking from Adventureland.  I'm actually rather looking forward to getting back to it, and unless a puzzle really stumps me I expect that I'll be done with it by next week.

I was going to do a full post on DND, but instead I decided to forge ahead with my list.  Rather than devoting full psts to DND, I'm going to give a quick update on my progress at the bottom of my posts on other games, which could be amusing given how balls-hard this game is.  I wonder how many other games I'll get through before I finish this one?


As of New Year's Eve, I was doing very well.  Axebeard (a dwarf, naturally, and successor to his brother Beardaxe) was 53rd level, and I was exploring level 11 of all three dungeons.  The earlier version of DND had a twenty level dungeon, so I figured I was about halfway through.  Later on I used a potion of Astral Form to take a quick trip to the bottom of Whisenwood Dungeon, and discovered that the dungeons are 30 levels deep.  Bugger it.

Most of the chests in this game are trapped, but if you're on one of the easier dungeon levels it's not a problem.  I was doing most of my XP grinding on Level 3 of the Tomb of Doom, which has a nice spiral pattern conducive to random wandering without needing to consult my map.  (Incidentally, I've discovered that wrestling is the perfect thing to watch while XP grinding.  I watch a lot of wrestling every week, so it works out well.)  On the deeper dungeon levels the traps can kill you, but if you have a ring of protection or some sort of magical armour you will usually survive an otherwise fatal blast (albeit with the loss of said item).  I had gotten complacent, and while exploring level 11 of Whisenwood with no protective items I opened a chest and was obliterated instantly.  On New Years Eve!  On my bloody birthday!!!  That was fifty+ levels of grinding down the drain.

I had to go back to the start, but I've managed to get my new character Strider up to level 20 by grinding on the first level of Whisenwood.  It's slow going, but now I am taking no risks.  I'm not even going to touch chests when I'm deeper than level 3.  My plan is to grind myself to about level 100, then make a run for the three items at the bottom of the dungeons (the magic fountain, the grail, and the orb).  Before I tackle each item I'm going to buy a Revival Potion from the alchemy shop - this ensures that if I die my character won't be erased.  It's going to take a long time, but I have patience, and I'm determined to beat this bloody game.  All I have to do is resist the urge to take risks.
Posted by Nathan P. Mahney at 4:56 AM