In choosing to write about CRPGs and adventure games for this blog, I've cast a wide net. Both of those genres are vast, and both of them have boundaries that can best be classed as "fuzzy". In making up a list that covers everything in both genres, there are going to be games that are questionable, because what it is exactly that defines an adventure game or a CRPG is up for debate.

The subject of this post is Treasure Hunt, a 1978 game created by Lance Micklus. Although Micklus was definitely inspired by Colossal Cave Adventure (citing it as an influence on his later game Dog Star Adventure), Treasure Hunt bears very little resemblance to that game. Instead it draws heavily on Hunt the Wumpus, a 1972 game that saw the player navigating a series of caves while trying to pinpoint the titular Wumpus and kill it with an arrow. Treasure Hunt is like a larger version of Hunt the Wumpus, with more dangers and 20 treasures to collect. There is no text parser, simply a series of prompts that are answered with numbers corresponding to the cave you want to enter, or a simple yes/no response. As such, its status as an adventure game is debatable. I think it qualifies. Yes, the interface is basic, but it does have an environment to explore and puzzles to solve. What else do you want?

Treasure Hunt was apparently available in 1978, but I haven't been able to turn up an image of its packaging, or any sort of instructions. It doesn't even have a page on MobyGames. The only evidence of its existence (aside from the game itself) seems to be a short write-up about it in SoftSide Magazine.

The version I'm playing is for the TRS-80, emulated using TRS32 for a decently authentic experience. 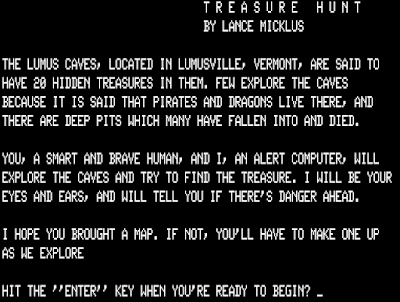 The game is set in the Lumus Caves, near Lumusville, Vermont (not a real place as far as I can tell). Scattered throughout the caves are 20 treasures that must be collected and dropped off at the cave entrance. As the screenshot says, there is indeed a dragon, as well as a pirate and a number of deadly pits. It also mentions a map, which the game apparently shipped with. I don't have that, and I declined to use the one made by Jason Dyer over at bluerenga.wordpress.com. I was going to be mapping this bad boy all by myself.

The bulk of the gameplay consists of navigating from one cave to another searching for treasure. There are 95 caves in total, numbered from 0 to 94, with 0 being the exit/entrance. Each cave lists the other caves it's connected to by number, and when prompted you move by typing the number of the cave you want to go to next. 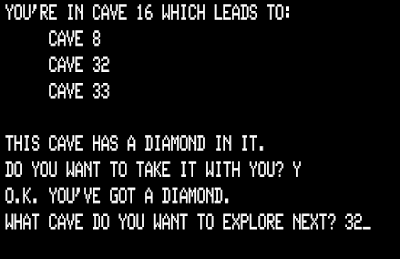 There are dangers, of course, such as the aforementioned dragon, pirate and pits. Whenever you're in a cave that's adjacent to one of these dangers, you will get a warning. By paying attention to which caves have warning messages, you can pinpoint where the dangers are located and avoid them. As long as you're paying attention, that is.

The treasures are scattered all over the map, and their locations are different every time you play (as are the locations of everything else in the game). You can only carry three items at a time, which makes collecting them all a little difficult. There's also the fact that some items are required to solve various puzzles, and that once you've dropped them off at the entrance you can't pick them up again. A big part of Treasure Hunt is figuring out which items these are, and learning not to collect them until much later in the game. The twenty treasures are as follows: a $1000 bill, a black book, a diamond, some elf food, an emerald, some furs, gold coins, a gold watch, a golden harp, jewelry, keys, a magic carpet, a necklace, an old clock, an old gun, a pearl, a ruby, a silver bell, a sword, and a wand. You can leave the game from the exit at any point, keeping any treasures you've collected. I have no idea if it does anything special when you obtain all 20.

I'll outline the various dangers and puzzles below, along with their solutions. There's no trick to solving the puzzles, you just need to have the right item in your inventory.


The first thing I did when starting the game was map the caves. At first I was simply noting down the cave numbers, followed by the numbers of each connecting cave, as follows:

Eventually, I noticed a pattern. All of the caves up to a certain point connect to the cave that is double their number, and the cave one higher than that. So Cave 1 connects to Caves 2 and 3. Cave 8 connects to Caves 16 and 17. Once I'd spotted this, making a map was pretty simple.

With a map made, and a list of every item, danger and special location in the game, it was time to try and collect all of the treasures. I almost did it on my first try; it's not that hard when you know the items to avoid collecting early (the coins, the keys, the gun and the wand). I collected 19 of the treasures, but one item kept on thwarting me: the magic carpet.

For some reason I can't figure out, the magic carpet keeps disappearing on me. Every time I try and get it to the exit it just vanishes into thin air. I haven't been able to figure out why it does this, or how to stop it, but it's happened in every game I've played. My hope is that it reappears in another location, but so far I haven't found it after it's vanished. It's very frustrating.

I took a look at Jason Dyer's posts on Treasure Hunt to see if he figured out the magic carpet thing. He beat the game, and mentioned that the carpet disappears sometimes. For me, it's been every time. At the moment I'm just playing repeatedly, hoping that I'll eventually get a game where the carpet stays in my possession. It obviously happened for Jason, but I'm wondering if there's some trick to it that he lucked into without realising. If there is, I sure don't know about it.

I'd hoped that this would be a one-post game, but no such luck there. Hopefully I'll be able to beat it by next weekend, but unless I can solve this carpet problem it ain't going to happen. I'm really reluctant to postpone victory for two games in a row, so if I can't figure it out I might be on Treasure Hunt for a really long time.
Posted by Nathan P. Mahney at 8:44 AM